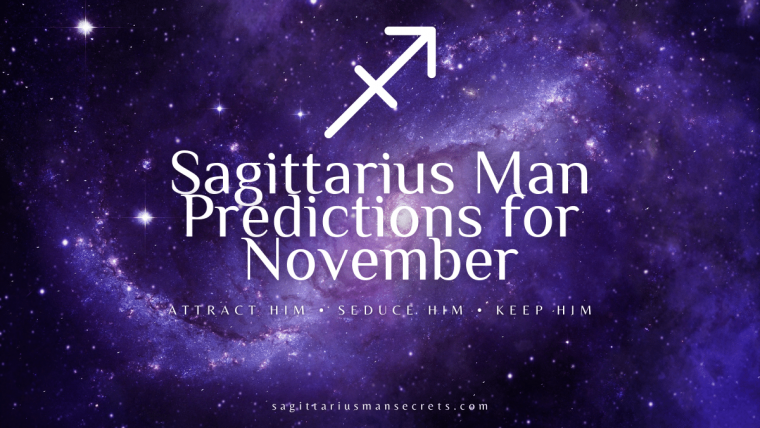 Hello, my darling readers, how did October treat you? Well, I hope, because now we are about to shift into a new month full of new predictions. The Sagittarius man will be feeling the transits this November… so, without further ado, let’s dive in!

The start of November offers a solemn atmosphere for the Sagittarius man’s mind. He’ll need someone to be on his side through this mess of things, and he could very well use a hype woman of his own, for a change.

The second week features a blasted Full Moon Eclipse in Taurus, so the Sagittarius man can suffer some stressful and/or health consequences that will culminate around the 8th of November. Make sure to lift his spirits up with an exciting and intellectually-engaging date during this week, he’ll be much obliged to you.

The third week of the month has the potential to finalize his inner transmutation and to let him transform from the ugly (emotional) duckling, into a powerful, majestic swan. He could become (an emotional) swan king during this week, although he should watch the percentage of alcohol in his bloodstream.

The final week of November offers a potent opportunity for new beginnings, and is incredibly kind to the Sagittarius man, since the New Moon, Fortune, Venus, and Mercury take place in his first house of self. He’ll also have a glow-up, so make sure to give him compliments where compliments are due.

The start of November is going to be quite… grounding for the Sagittarius man. There’s a full house in his twelfth field of dreams, fears, and hidden enemies, and his ruler has moved to Pisces in its Retrograde state, where it’ll meet up with Neptune, who is also Retrograde.

The Moon might be moving through his fifth house of fun and pleasures, alas, it conjuncts Chiron there, so no fun for Sagittarius. The Sagittarius man will have to own up to his responsibilities, promises, and fears during this period.

This is a good time for giving him space (and time) to deal with all of that baggage that kept following him from the October Retrograde season. Conversely, it’s a good moment to hype him up for a change and to be on his side of the ring.

The Sagittarius man doesn’t ask for much (unlike the Leo man), nor is he very confrontational about his wants (unlike the Aries man), so being on his side and in his corner of the ring when he’s down, isn’t much of a sacrifice, to be honest. I know Gemini and Sagittarius don’t see eye to eye due to our opposition, but dang, give a man a break when he’s down!

No Man Can Take Me Down…

If the first week was intense for the Sagittarius man, the second week has come to up the stakes. With a Full Moon Eclipse in Taurus, in his sixth house, and strong opposition to the residing party in his twelfth house, the Sagittarius man’s health conditions will culminate.

This week is a good time for him to get his yearly checkup, or to do a procedure that will rid him of certain chronic pain or disease he’s been fighting with. This is also a good time to ask him out on an indulgent date and do something “benign” that will elevate his mood and lift his spirit.

The Sagittarius man might feel extreme pressure from this lunation not just on his body, but on his psyche as well, and he might have some wild dreams during this period. Watch out for him, and make sure to check up on him regularly. He’s one of those guys who don’t complain until they’re dead.

This week also offers a great opportunity for fun and intellectual dates, once the Full Moon passes, so keep that in mind, and make sure to plan something grand for him, in order to make him absolutely positive, no matter the outcome at the doctor’s office.

When the third week comes, the Sagittarius man’s mood will be slightly better than it has been during the previous two weeks. Plus, he will be open to more emotional and philosophical conversations and topics; so, it’s safe to assume that he’ll be (more or less) back to his old, cheery self.

This week offers a good opportunity to invite him out to social events, to introduce him to your friends, and to go on a short trip together, perhaps.

It’s a grand time to discuss life and the cosmos, to drink light wine, and to pretend you’re in a poet’s club society. If you have any cosplay parties you’re invited to, take him with you, he’ll enjoy a bit of cosplay and light-hearted fun during this time.

This week’s also a perfect moment for him to (finally) release most of the romantic fears he’s been harboring in himself for the last couple of weeks, and to let the dam be broken. Don’t be surprised if he suddenly turns very serious after a few drinks, and starts talking about his emotions out of nowhere.

This is a great time to get the truth out of him and to hear about his deep feelings that no one knows about. Watch your liquor levels, though…

New Hope For A Better Tomorrow

When the fourth and final week comes, so thus it dawns for the Sagittarius man – there’s an enthusiastic New Moon in Sagittarius on the 23rd, and with it, there’s also Mercury, Venus, and Fortune. He’s one lucky guy, let me tell you, and this luck begins to be visible for all to see, once again.

The theme of honesty through alcohol overdose continues – thus, I advise caution with spirits and hard liquors. Things are also heating up for combustion at his home and with his family, but this time around, the Sagittarius man has luck on his side.

This is a great time to receive blessings, good luck, and good news from him. It’s also a very good time for practical and pragmatic dates and romantic encounters that will leave you hyped up and motivated.

Since he’s back to his usual self, he’ll resume the role of a hype man again, and he will have a very positive influence on all those around him, especially on his lover/partner.

This week is a good time to spill your fears and downers in front of him, and he’ll make sure to give you some sound, yet very motivating advice that can help you live your best life. Trust in the Sagittarius man, and trust his vision, for few others can see the stars he sees with his shiny eyes…

There you have it, my dear readers, the Sagittarius man’s November in a nutshell… It’s a tough month for him, in the beginning; it requires a lot of introspection and facing up to his own fears.

But if anyone can do it, the Sagittarius man can. He might seem neither loud nor brave like the Aries or Leo man, but he has the secret strength and power in him – the power of faith and Fool’s hope that all will be alright even when it’s not.

So, put your trust in him, especially around the 23rd, when there’s a mighty New Moon in his own sign, and trust him that he’s channeling the Universe’s desires competently and potently.

If you are still having doubts about the state of your Sagittarius man or feel as though your relationship can use a little bit of a boost, then you might want to book a VIP consultation with me to solve your burning questions.

This way I can dig deep into your unique situation and you can come out on the other side feeling more connected than ever. I’ve reserved some spots for my readers, so if this feels like a call you need, book your consultation with me here.

Until next time, my lovely readers – I wish you all the luck in the Universe on your journey!