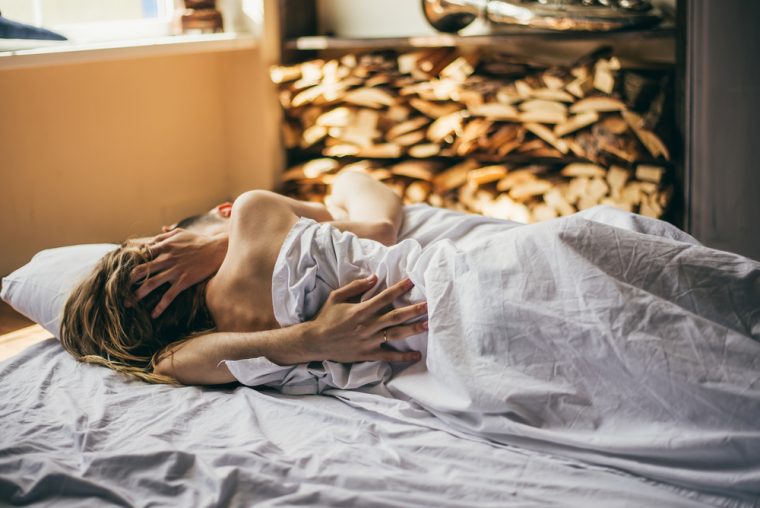 A Sagittarius woman and a Cancer man can be quite the interesting couple… They couldn’t be more different from each other if they tried! This is definitely a case of opposites attracting.

But sometimes, this opposite energy can cause quite a bit of friction in the bedroom. There is no doubt about it when a Sagittarius man and Cancer woman make it to the bedroom, sparks fly!

They can be passionate and full of intense energy together. But are they actually a good sexual match? Is the Sagittarius man and Cancer woman compatible in the bedroom?

If you’re a Cancer woman and you’re curious about what a Sagittarius man likes in bed, then keep on reading to keep him happy and satisfied, and keep coming for more and more.

The Basics of Sagittarius Man and Cancer Woman

To be as candid as I can, this isn’t the best match. While they may be initially physically attracted to each other by their outer beauty, it’s not enough to sustain much more than a temporary relationship.

Sexually, they may try to even have a fling which may seem like a good idea but it will fizzle out with time if they aren’t careful. This union would take a great deal of work to be long-term sexually or as a love relationship.

They enjoy talking and, in the beginning, the Sagittarius man doesn’t mind making the Cancer woman feel good and comfortable. However, when he starts talking to her further, he starts telling her things that she probably could go without hearing.

He is so truthful it’s sometimes painful and a Cancer woman finds it hard to cope with him telling her things flat-out. Even in bed, he is up for just about anything and she will want more of an emotional connection.

A Sagittarius man loves sex for the value of being physical and having a good time or an adventure. I’m not saying that this isn’t a possible match but I’m saying it’s not the best either.

While these two have the capability, they both have to really want to work on it and they really are sort of the opposite in personality. They have some things in common but not enough to find a true, long-lasting bond.

If you are a Cancer woman and you really do want to make it work with your Sagittarius guy, then there are some things you can try to do with him or for him in the bedroom. This will work even if you’re only having a casual fling as well.

The Sagittarius man is always up for fun. If you are willing to put your “feelings” on the back burner and just do what is exciting and different from your norm, then you might find him to be quite responsive.

If you’re looking for him to find some sort of emotional bonding through sex, this is where you may be a bit disappointed. He is spiritual and he cares but for him, sex is just fun and a release.

He’s very physical and loves having a good ole romp in the hay. He’s not picky about how sex is had, but he definitely isn’t going to have that emotional or spiritual pull that you as a Cancer woman would want to feel secure.

If you’re just having a fling with him and aren’t expecting feelings then you might be alright. Suggest playful sex, and wear costumes or sexy lingerie. Ask him to try new toys with you or take him to a strip club to let him get all worked up.

This will make him take out all his build-up of aggression with you which could be highly beneficial – not to mention he’d be impressed you’d go through all that just to please him. He’ll love it!

The Sagittarius man wants to have as much excitement as possible and this is especially true when it comes to sex. Make it adventurous, sexy, and delicious. This could lure him into wanting more.

When you’re trying to lead him from sex to something more fulfilling, you’ll need to show him other ways that you’d fit into his life such as going places with him, traveling, doing new things, trying new places, and being open for change.

What Else The Sagittarius Man Likes Sexually

You can work at appealing to his erogenous zones if you’re trying to seduce him. This would be his inner thigh. Gently kiss him and caress his thigh with your hand. The closer you get to his crotch area, the more turned on he’ll get.

When you do have sex, try out various positions. He gets bored doing it the same way every time; he needs variety. Switch it up and try looking up some interesting new sex positions in the Kama Sutra if you need to.

Don’t worry about whether or not he’ll have a one-night stand with you because the answer is… most likely. If that’s all you want then he may be up for it if you can successfully turn him on enough.

Sagittarius is free-spirited and even though he’s looking for “the one” just like everyone else, he’s up for a bit of fun along the way. Keep that in mind if you ever want to commit to him.

He will need you to show him that you’re the right one otherwise he’s going to just have fun with you regarding sex and then leave it at that. Be very careful of your intentions when you decide to hook up with him.

Try having lots of foreplay with him. That will definitely get him revved up. He wants sex to be somewhat athletic and like exercise. I mean that in the way that he likes to go all out and make it last.

Doing multiple positions during sex will definitely provide him with optimal pleasure. If there is something you need from him, tell him. It will turn him on and he’ll be more than happy to do it.

He likes being kinky and exerting lots of energy into having fun. If you can go with the flow, you’ll enjoy yourself as well.

To be honest, the Sagittarius man and Cancer woman aren’t the most compatible when it comes to sex. However, the differences are what cause friction in this relationship, and this can be considered dang sexy. Like I said before, this isn’t the best match.

A Sagittarius man and Cancer woman might have a good fling, but as time goes on, they will both realize that they aren’t compatible even in the slightest. A Cancer woman will eventually want more because her focus in life is finding a connection and building a family with a partner.

On the other hand, a Sagittarius man is driven towards freedom and independence. He wants to be without a ball and chain. These differences will make this relationship extremely difficult to navigate, even if they have very passionate moments in the bedroom. It simply might not be enough for them.

Read more about a Cancer woman and Sagittarius man’s love compatibility in this separate article.

How To Turn On Your Sagittarius Man

He’s a very cerebral guy. You need to know exactly what to say to trigger his sensual side. I have some tricks you can use to stimulate him via words instead of actions. Not to say that what I’ve shared thus far isn’t enough, but what if you could make him absolutely crazy with lust for you?

I’ve got several things you can say to him that will blow his mind…You can make him want you, want to commit to you, and want to stay with you. I want to give you the keys to open up the Sagittarius man’s heart. You can do this through his mind with your words.

Do you want more passion with your Sagittarius guy? I’d like to share some things with you that will help. I have something you really need to read. It will help you in ways you could have never imagined. Don’t miss out on this amazing opportunity to learn more about him!

Making a Sagittarius man fall in love with you isn’t easy, because he is such an independent guy.

He is a straightforward man who loves a wild woman in the bedroom.

Have you as a Cancer woman successfully seduced a Sagittarius man? How did you do it? Share your story with me!

If you want to better understand how compatible are Sagittarius man and Cancer woman in bed, click here and learn everything there is about this interesting combination.