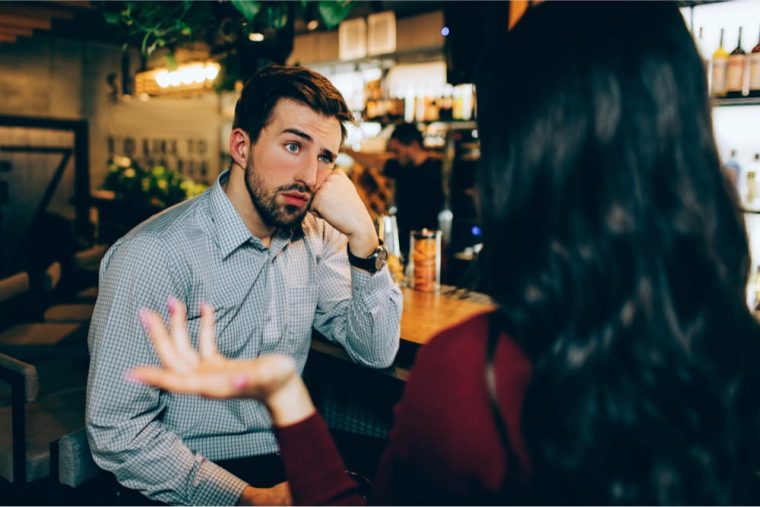 When a Sagittarius Man Is Mad at You: How to Fix Things Quickly

He’s really angry with you, is cold, unresponsive, and isn’t returning your calls. What can you do when a Sagittarius man is mat at you? I’ve got some useful information to share with you if you’d like to continue reading. These are things you must know!

There are some things that you probably should do that will help your Sagittarius man calm down when he’s angry with you. It’s important first and foremost to let him go cool off if he says he needs time to himself.

Sagittarius processes things much better when he can get a few minutes or hours to himself. He will mull everything over, hash it out in his mind, and then be more ready to discuss things with you.

When he does come back and is ready to talk, do not attack him or yell at him or he will quickly shut you out again. Talk to him with a cool demeanor and listen to what he has to say without interrupting him.

He hates when he feels he’s not being listened to and he will start yelling or slinging insults if he does perceive that he’s not being heard. This is why it’s crucial you let him say his peace before you start to explain your side.

In fact when he says he’s ready to talk, sit down with him and tell him to go first. That way he can get everything off his chest and then you can apologize and tell him your side and what may have happened.

Once everything is on the table, you can then work toward picking up the pieces and finding a solution that will make sure that you two won’t fight over the same thing again and again.

Sagittarius will only put up with a repeat performance of the same problem for so long before he decides it’s not working out for him and will want to leave. Be careful to actually work toward not fighting with him.

Other Things To Help Sooth Your Savage Sagittarius

Sagittarius men are not typically quick to anger and won’t hold onto it for very long either. You have to really push his buttons to piss him off. Try not to push his buttons. Eventually you’ll learn what they are and know what to avoid.

After you’ve apologized and had “the talk” to smooth things over, you can start playing on his optimistic view on life. You can remind him of the bigger picture of your relationship and how amazing it is over all.

Once you remind him that this is just a temporary speed bump that you both learned from it, he’ll feel a whole lot better. Also telling him to remember the silver lining of what is going on, he’ll probably agree with you.

Of course when he’s agreeing with you, you probably have calmed him down quite a bit. Again, he’s not one to hold onto anger for very long anyway unless you’re continuously pushing buttons which is ill advised.

While it seems like he could chop people up into little pieces when he finally does get angry, he will calm down so fast that nothing really happens. Maybe a broken ashtray or glass but nothing major.

He’d have to be to the extremes to get any further out of control than that. This isn’t normal Sagittarius behavior though. If you’ve ticked him off just follow the steps I gave you as it should help diffuse the situation between you.

I will warn you though, don’t try to retract your statement or action right when it happens and while he’s still angry because he won’t want to hear it. Let him have space and time before you approach him to talk.

Things That Piss Sagittarius Off

It might be helpful to know what most Sagittarius’ buttons are so that you can avoid pushing them. I’d like to help you in advance if I can because it’s better to know and not anger him than to experience it firsthand.

Some of the things that anger the Sagittarius would be saying he’s a liar, cheater, fake, a fraud, worthless, or lazy. Also if you’re lazy yourself and don’t take care of business, he’ll be highly annoyed.

If you treat him with rough words or are mean to him when he’s trying to be kind to you, he will resent you. Being crabby around him or taking your day out on him is unacceptable.

Clinging to him and not giving him breathing room will push him away also. He loves to snuggle and show affection but not all the time. Sometimes he wants his own space even while sitting next to you.

Constantly complaining or gossiping about others will piss him off. He will also get angry if you make fun of people who they don’t really know. Sagittarius is a justice seeker and will bring down brimstone on your for being so judgmental.

It’s usually best not to get on the Sagittarius man’s bad side. He doesn’t like being around someone he feels he has to walk on eggshells with either. If he doesn’t feel comfortable, he will eventually want out.

This would come from him trying to always be honest and open with you but you taking offense and accuse him of being critical or judging him when he’s only trying to help give you a better way.

Just keep in mind that he’s not an easy guy to piss off unless you go right for his buttons which I shared with you. Otherwise be simple, be honest, let him cool off, and then apologize. Things should smooth over.

Did you piss off your Sagittarius guy and end up smoothing it over? What did you do? Share with me!