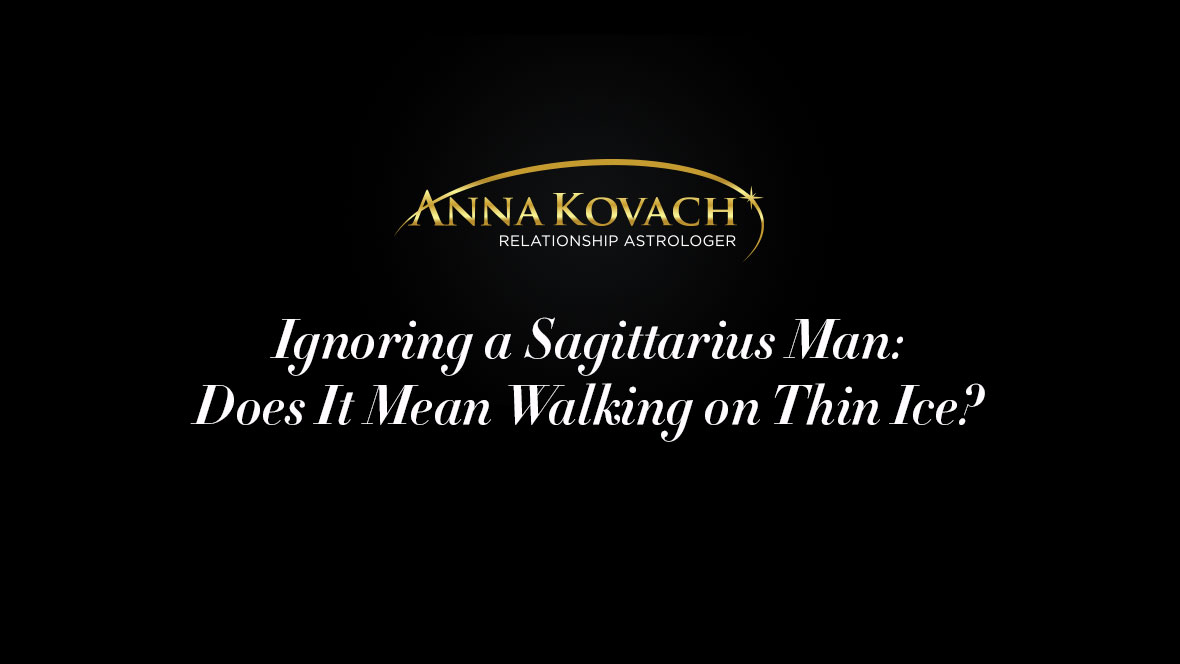 Ignoring a Sagittarius Man – Does It Mean Walking on Thin Ice?

Are hurt, annoyed, or angry with your Sagittarius guy and are wondering if you should give him the silent treatment? Maybe he hasn’t been forthcoming with you and you want to see if ignoring him will make him chase you. None of these are worth ignoring a Sagittarius man. Keep reading for reasons you may be on a slippery slope if you choose to ignore him.

The Sagittarius man works via logic and reason. He also operates on honesty. If you are upset with him in some way, it’s best to tell him the reason. If you go quiet on him he’ll either not know or he’ll get upset with you for going silent.

The way he sees it is, if you don’t tell him what is wrong, how is he supposed to fix it or work to not do it again? He has to know exactly why you’re upset, in what way, and what happened.

I wouldn’t hold back because it will only bounce back to you and you’ll regret having not told him. If you want him to do better or not repeat the same mistakes, you have to be totally open with him.

Don’t be afraid of his reaction to what you have to say. You NEED to tell him what the truth is. He’ll appreciate it even if it does temporarily upset him. He’ll get past it and see your side of it thus finding a way to fix the problem.

You need to always be honest with him no matter what it is. Yes, he may get upset upon the first mention but he’ll get over it very quickly and will understand that he needs to work on whatever it is.

Ignoring him will only piss him off, make him shut down, or he’ll think that nothing is wrong at all thus you’ll not get the response you were hoping for. Don’t withhold your feelings from Sagittarius man.

Attempting to get him to chase you

The truth is, Sagittarius men aren’t really about the chase much. He wants to pursue someone who shows interest in him. If he thinks you’re blowing him off, he’ll likely think you don’t like him and he’ll move on.

This isn’t a risk worth taking. If you like him, let him know and be totally forthcoming with your intention. He’ll be more receptive to this than trying to ice him out thinking he’ll run to you. He won’t.

Sagittarius man doesn’t want a woman who wants to play head games. The coyness and trying to be “too busy” for him tactic will not work. You will be quickly forgotten if you choose to take this route.

He would prefer you tell him that you’re into him and want to get to know him better rather than only texting him a little then leaving him hanging. Ignoring a Sagittarius man is not a wise decision.

He will not come after you as he’ll look for other more appetizing opportunities elsewhere. He doesn’t mind a chase but he has to know the woman actually wants him. Ignoring him says you aren’t into him.

This may not be the message you’re trying to convey. Maybe this tactic works with other men but I can tell you, Sagittarius man isn’t having any of that. He will not waste time or energy on someone who ignores him or blows him off.

Better to talk than ignore him

As you’ve read so far, you can see that ignoring a Sagittarius man won’t get you desired results. You have to talk to him, tell him how you feel, tell him what went wrong, why you are hurt, or even that you like him.

No matter what you’re trying to tell you Sagittarius, be straightforward. He doesn’t get “hints” and isn’t good with trying to deal with sideways emotions. He’ll be totally confused or he’ll give up.

The last thing you want is to have him give up on you and walk away if you really like him. So my suggestion to you is to put your big girl panties on and tell him the truth in what is going on.

It won’t be comfortable but at least you’re being on level with him and he’ll appreciate it. Ignoring him just basically tells him that “nothing is wrong” or “she just doesn’t like me that much”.

If neither of these messages are what you want him to think or believe then you had better re-think this ignoring the Sagittarius man thing. He isn’t one that this tactic works on.

Another thing is, if you go cold, he may become bored with you and that’s another reason for dismissal. He will want to move on and find more excitement elsewhere. Playing games with him will only make him blow you off… for good. Don’t let that happen. Take control, get out of your comfort zone, and tell him how it is. Angry? Tell him why. Hurt? Explain what happened.

I can almost guarantee you that when you tell him why you’re fuming mad, he will be upset but when he calms down, he’ll think about what you said and put the pieces together to be more understanding.

Sagittarius is one of the few signs that can actually see the mirror for what it is, find solutions, and try to find middle ground. Clearly if he does this, he really cares for you and will stick around.

Be a real woman and talk to him. He’ll think you’re an immature little girl if you aren’t able to talk to him. He’s one that would rather get it all out on the table and try to find a solution rather than the silent route.

If you need to take a few minutes to think things through, you can simply tell him that. He’ll give you the time and then you can come back and work through it WITH him.

HOW TO ORDER MY “SAGITTARIUS MAN SECRETS” GUIDE?

Click this link here and when you scroll down to the bottom of the page click “ADD TO CART”. Once you complete your order, you will gain INSTANT access and can start understanding your Sagittarius man within minutes.

Don’t forget your purchase is 100% RISK-FREE, backed up by my 60-day money-back guarantee. So you’ve got nothing to lose to give this a try and see how it works for you.